LingoTaxi offers you transfer services from any of the ten train stations within Moscow to your hotel, apartment address or the airport (and vice versa). We offer our customers one fixed price per Moscow train station transfer, no matter where you go within the city. Our fares are per vehicle, not per passenger. Our transfers include English-speaking chauffeurs.

Our train station transfer in Moscow includes meet & greet with a name board at the platform of your train and 30 minutes waiting time. For pick up at your hotel or apartment, 10 minutes of waiting time is included in the fare.

Travel in comfort and book your ride from the hotel, train station or airport in advance with LingoTaxi. Important: Pick up from train stations are only offered from fixed scheduled long-distance trains. We do not offer pick ups from the Aeroexpress or local elektrichkas. For comfortable airport transfers, please have a look at our hassle-free Moscow airport transfer service.

Our Russian train station transfers include:

Pick up at the train station includes:

Pick up at the hotel (or address) includes: 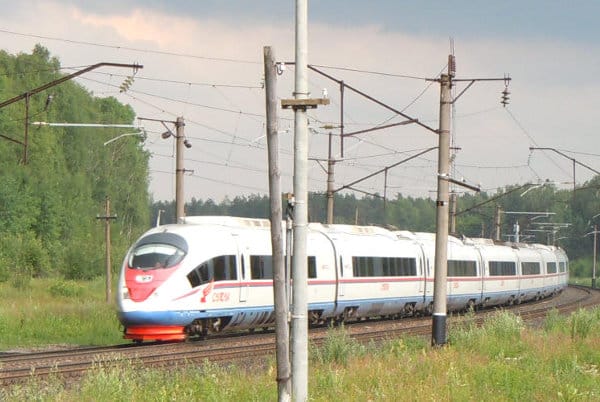 If you wish to make a trip from the train station to a location outside of Moscow (the MKAD – Moscow Ring Road is seen as the city border), the transfer will be charged with an additional fare per km (see above) or with a fixed fare if it is one of Moscow’s four international airports. Our dispatchers can quote you the exact fare to specific locations outside of Moscow (e.g. airports), depending on the specific train station.

How many train stations are there in Moscow?

Since 2021, there are 10 train stations in Moscow. Almost all train stations are located comfortably within the city center. In the north-east of the city center, at Komsomolskaya metro, you will find the three major train stations of the city: Kazansky, Yaroslavsky and Leningradsky Railway Stations. As the names suggest, if you for example departure on a train to Kazan, your train station of choice most likely is Kazansky, and so on. Trains to Saint Petersburg generally leave at Leningradsky train station. The famous Trans-Siberian train generally departs from Yaroslavsky railway station. However, as always, we recommend you carefully check on your train ticket the departure train station, as these might change on short notice due to random circumstances.

What is the main train station in Moscow?

While Kievsky Railway Station is the largest train station in Moscow, for foreign visitors the most frequented train station in Moscow is Leningradsky, also known as Moscow Passazhirskaya station. The latter station connects Moscow with Saint Petersburg as well as cross-border trains to Finland and Estonia. Furthermore, it is the departure point for the high-speed Sapsan train to St. Petersburg.

LingoTaxi
Average rating:   1004 reviews
Mr A
by Mr A on LingoTaxi
Excellent
Lingo used in:: Moscow

Fantastic trip to and from the airport. Kind, helpful and courteous English speaking drivers. Arrived in time. Would not use another compony... Continue reading...

On a recent trip to St Petersburg we booked LingoTaxi for pick ups and for a tour and, to put it mildly, our trip could have been ruined without... Continue reading...